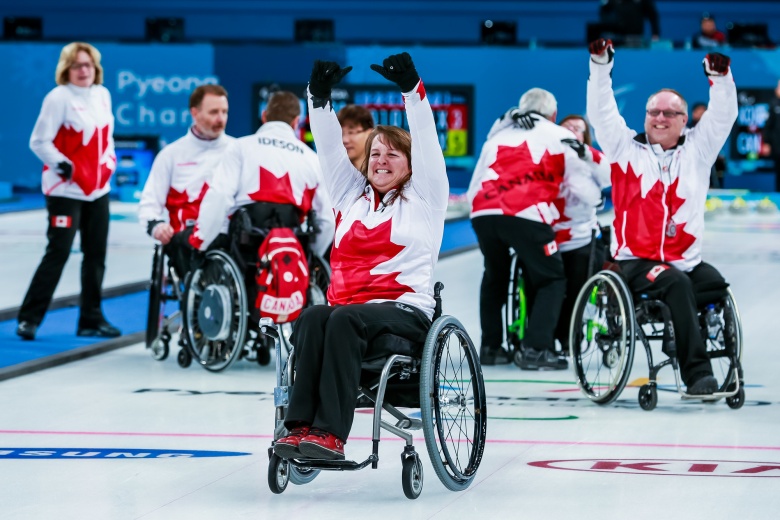 Canada continued their record of medalling in every Paralympic Winter Games wheelchair curling competition, when they defeated Korea 5-3 to win the bronze medals today (Saturday 17 March) in the Gangneung Curling Centre.

Korea began the game with the last stone advantage but were unable to make it count with Canada stealing two points in the first end.

With that stone, Cha played a stunning runback triple takeout to remove both Canadian counters from the house, ultimately blanking the end.

In the third end, Korea – skipped by Soon Seok Seo, with fourth Jae Goan Cha, third Seung Won Jung, lead Min Ja Bang and supported by alternate Dongha Lee and coach Jong Chul Beak – sat one stone in scoring position when Cha attempted a difficult hit-and-roll on a wide guard for two. He was a fraction off target on the hit attempt, and only scored the one point.

Canada had the chance to score three points in the fourth end, skip Mark Ideson, came up short with his draw attempt, scoring two points and taking a 4-1 lead into the fourth end break.

In the fifth end, Korea once again sat shot stone, and Cha attempted a tough hit-and-roll to score two points. His hit was once again a fraction wide, rolling his shooter out to the 12-foot and only scoring one point.

The sixth end saw the roles reversed, with Canada sitting one point and Ideson attempting a tough hit-and-roll for two. Just like Cha before him, he was a touch wide with his hit and only scored the single point from the end.

In the seventh end, Cha had a draw for two points to narrow the score but came up short, only scoring the single point. Then, in the eighth end, with Canada holding last stone advantage, Korea’s Cha attempted to promote a Korean guard into scoring position to sit two counters, but was off-target with the attempt. This meant Canada’s Ideson’s last shot was unnecessary, as Korea conceded, giving Canada the 5-3 win, and the Paralympic bronze medals.

Mark Ideson; skip, Canada (after 5-3 bronze medal win over Korea): “I’m super proud. I mean yesterday we’ve put ourselves in a good position to repeat the gold medal win from Sochi, Vancouver and Italy before that, but we’ve played our hearts out yesterday and the result didn’t go our way. We picked each other up last night, gave each other a hug, got some good sleep and came back out today and played for each other and played for Canada.

I did shed a tear because my family is here, my kids, my wife, my parents are here. In 2007, after my accident I couldn’t imagine being in this position. I was a broken person and we were navigating new waters and without the support of my wife and my family I wouldn’t have made it here, that’s for sure.

Soon Seok Seo, skip, Korea (after 5-3 lose against Canada): “I wasn’t at my best since yesterday because of the semi-final game. But I would still like to thank my parents and all the crowd for the cheers. We should have gained a medal because now the crowd must be disappointed, but I still thank the supporters for being there for us.”