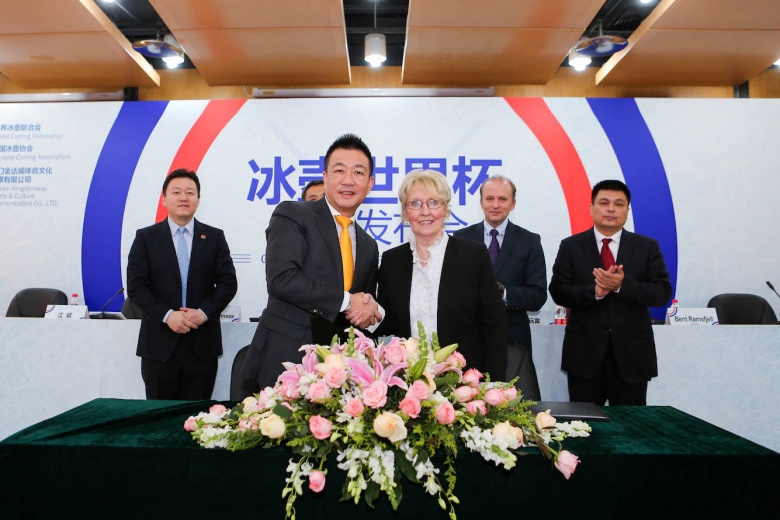 The World Curling Federation, Chinese Curling Association and Kingdomway Sports held an official signing ceremony, this week in Beijing, China, reaffirming the four-year partnership to establish what was previously known as the World Series of Curling.

The ceremony confirmed that the four-stage competition will be called the Curling World Cup and each season will begin in China in September/October, followed by a stage in America in November/December, then Europe in January/February and a Grand Final in Beijing, China in May. Exact dates will be confirmed in due course.

Each stage will include women’s, men’s and mixed doubles tournaments and eight Member Associations will compete. The World Curling Federation are currently tendering for a European and American host city.

At the signing ceremony, World Curling Federation President, Kate Caithness, said: “The Curling World Cup shoulders an important mission as we move towards the Olympic Winter Games Beijing 2022. With the competition to be broadcast worldwide the Curling World Cup will improve the influence of curling globally.”

With China’s successful bid to host the 2022 Olympic Winter Games, it’s the country’s ambition to have 300 million people playing winter sports by 2022.

Mr David Jiang, the CEO of Kingdomway Group said: “For creating atmosphere to the Beijing Winter Olympic Games, all the final competitions will be held in Beijing in the next four years. Meanwhile, we welcome more cities which devote themselves in winter sports and the project for 300 million people, to join us [in winter sports]. In marketing, Kingdomway Sports will improve the promotion, step by step and aim to provide high-level and professional competition for the curling amateur.”

Further announcements about the Curling World Cup will be made in due course as the implementation process continues.