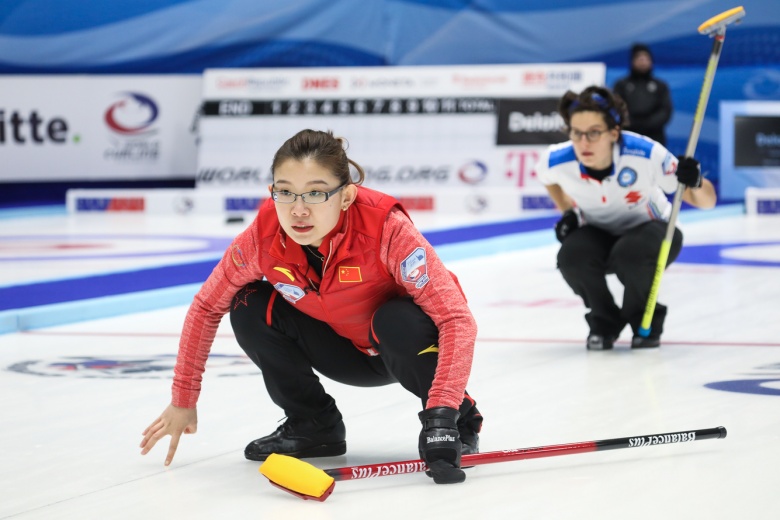 China’s women became the first team to gain a place at the PyeongChang 2018 Olympic Winter Games from the Olympic Qualification Event 2018, being staged in Pilsen, Czech Republic, when they beat Italy by 11-4 in Saturday (9 December) evening’s first qualification game.

Italy still have a chance to join them – they face Denmark, who finished third overall at the end of the round-robin – in the second qualification game on Sunday (10 December), with the winner of that game also joining the nine National Olympic Committees already qualified, including China.

Italy opened the scoring in this game when their skip Diana Gaspari drew her final stone of the first end to score three points, but China – skip Bingyu Wang, third Yan Zhou, second Jinli Liu and lead Jingyi Ma, supported by alternate Xindi Jiang – dominated from then on, stealing three points in the third end and then four points in the fourth end on the way to an 8-4 half-time lead.

A score of one point in the sixth end and further Chinese single point steals in the seventh and eighth ends were enough to persuade Italy to concede after eight ends with the final score at 11-4.

For skip Wang and third Zhou, this will be a third Olympic appearance, having previously played in Vancouver (2010), where they took bronze medals, and Sochi (2014). Second Liu was alternate in Vancouver.

The winner of that game will secure the first available men’s place at the PyeongChang 2018 Olympic Winter Games.

Bingyu Wang; skip, China (after 11-4 win over Italy to qualify for the Olympic Winter Games): “It feels so great – this is the third time [at the Games]. It wasn’t easy for me or the team but we tried our best and we’re going there – we’re so happy! I think everyone was a little nervous, so we had some mistakes, but we didn’t lose ourselves, we just continued one rock at a time. This is a big thing for me and the team. I think everyone at home will be proud of us.”

Diana Gaspari; skip, Italy (after 4-11 loss to China): “We had two really bad ends where I missed the last throws and we know that with this team when you’re down three or four they’re really good at clearing everything out of the house, so it’s really difficult to come back. There was too much tension for us and we couldn’t really focus on the basic technique. We have to learn because we have played only a few play-offs, so we need to train how to deal with this tension and pressure. But, we are ready for tomorrow. Now we have to come onto the ice with the same attitude we’ve had during the week, just relax and think about the shots like training shots and not think of where we are.”

To keep up-to-date with all the action from these championships, and the teams’ journey to the 2018 Olympic Winter Games, follow us on Twitter, Instagram (@worldcurling) and Facebook (/WorldCurlingFederation) and use the hashtags: #OQE2017 #Roadto2018 #curling