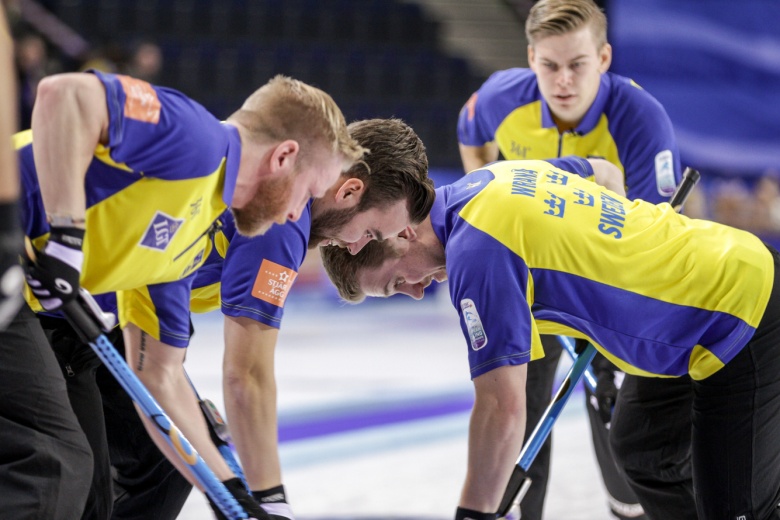 From playing Yatzy on tour to the Olympic Winter Games

Welcome to our third Olympic Winter Games 2018 athletes feature, where we meet the teams selected to represent Sweden at PyeongChang 2018.

Sweden women will be skipped by Anna Hasselborg in the Gangneung Curling Centre, during the Games.

During the 2016-2017 season – their breakout year – Hasselborg’s team made up of vice-skip and third Sara McManus, second Agnes Knochenhauer, lead Sofia Mabergs and alternate Jennie Waahlin, won the Oakville OCT Fall Classic and Stockholm Ladies Cup, as well as reaching the play-offs in a number of other World Curling Tour and Curling Champions Tour events.

They also won silver medals at the Le Gruyère AOP European Curling Championships 2016 in Braehead, Scotland, which subsequently qualified them for their first World Women’s Curling Championship – 2017, in Beijing, China – where they finished fourth.

Hasselborg, McManus and Knochenhauer all were part of the World Junior Curling Championship team that won gold in Flims, Switzerland, in 2010. For Knochenhauer, this will be her second Olympic Winter Games, having served as alternate in the 2014 silver medal winning team, in Sochi, Russia.

His best finish at the Games came in 2014, when he collected bronze medals. His vice-skip and third Oskar Eriksson also was at the Games in 2010 and 2014, as an alternate. The remaining members of his team are second Rasmus Wranaa, lead Christoffer Sundgren and alternate Henrik Leek.

This outfit became the first non-Canadian men’s team to win a Grand Slam of Curling event, winning the opening tournament of the 2016-2017 season – the WFG Masters. They went on to win another two Grand Slam events that year.

Q Where’s the best place you have visited as a curler?

A Vancouver, Canada and Flims, Switzerland.

Q Who is the joker of the team?

A The four of us I must say.

Q Who is the most serious member of the team?

A Haha, I’m hundred percent sure the team would say me [pictured below]

Q What do you do in your spare time to relax?

A Spending time in my summer house with my family.

Q Greatest achievement as a rink?

A Our first two [international] championships as a team – Europeans and Worlds – and the 2016-2017 Grand Slam season in total.

Q What team do you have the most fun with on and off the ice?

A We have fun with a lot of teams. Also, Team Edin who we play Yatzy with from time to time on tour.

Q Do you have nicknames and what’s the story behind them?

Oskar: Mine is “Oger” – from ogre. Maybe I think I’m stronger than I am!

Christoffer: My brother started calling me Crippa when I was younger in reference to the italian footballer Massimo Crippa. Not because it was his favourite player or anything, just because Crippa went well with the name Christoffer.

Henrik: The Knife, because of my sharp knees and elbows.

Q What is your guilty pleasure (food, film, music)?

Oskar: I play too much Fifa when I’m home.

Q Where’s the best place you have visited as a curler?

Oskar: Victoria, BC was beautiful. And Las Vegas! Almost forgot that place, haha!

Christoffer: Halifax! Beautiful city and made it more fun when winning Worlds there in 2015.

Q What career would you have if you weren’t a curler?

Oskar: Not sure. My grandfather owns a lot of forest and farming land so I have always been there during the summers when I grew up.

Henrik: I’ve actually got a full-time job besides curling as a consultant for sustainable office furniture. Perhaps I would’ve given a career as a music producer a shot?

Q Who is the joker of the team?

Christoffer: Rasmus – the youngest and goofiest.

Q What team do you have the most fun with on and off the sheet?

Oskar: The pants (Team Ulsrud). They are just hilarious!

… the first rink, so far, to unanimously agree on the best team on the tour.

In the run-up to the 2018 Olympic and Paralympic Winter Games in PyeongChang, Republic of Korea we celebrate the success of the curling qualifiers heading to the Games in (8-25) February and (9-18) March.

In the coming weeks and months, we will speak to the athletes that have been selected or qualified to represent their Member Association in the Gangneung Curling Centre.