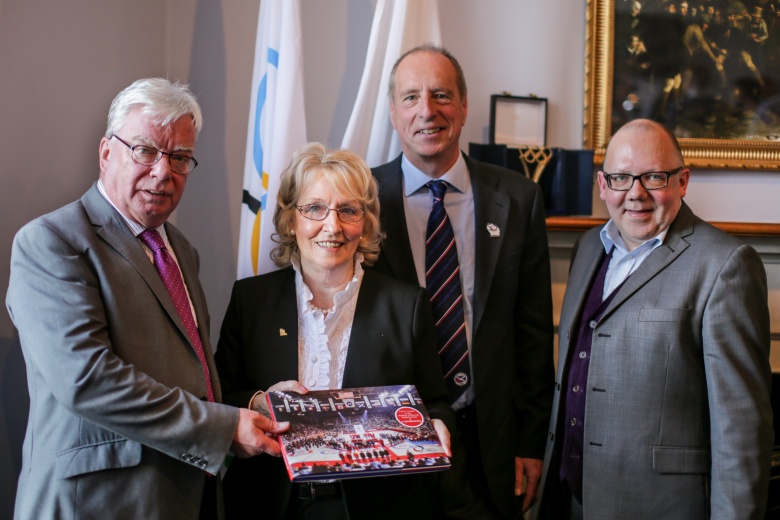 The World Curling Federation (WCF) has this week unveiled a special book to mark its 50th anniversary, at a launch event held in its headquarters in Perth, Scotland.

The book, written by Mike Haggerty, photos compiled by Richard Gray and design by Douglas Colquhoun, covers major shifts in the last 50 years of curling including the introduction of the sliding delivery, and curling’s inclusion in the Olympics.

WCF President, Kate Caithness, said: “This book is a first-class addition to our celebrations during our 50th anniversary year and a tangible legacy as we step into the next 50 years. Thank you to the team that put together this wonderful commemorative book!”

Haggerty, who was approached by the World Curling Federation to write the book at the start of 2016 said one of the highlights was talking to the many curling greats he interviewed in the process.

“We had a fantastic meeting with some specialists at the world championships in Basel,” he said, “and all these guys are absolutely marinated in the sport, so they just all spill it out.”

He also noted the hard work that went into the publication from the entire team. “The guys who put the magic dust on it,” he said, “were Cameron MacAllister the editor, Douglas Colquhoun the designer and especially Richard Gray the photographer.”

The launch event saw members of various Member Associations such as Korea, USA, Finland and Wales come to the World Curling Federation headquarters in Perth, Scotland where guests enjoyed champagne and canapés, while touring the office and chatting with the book’s makers.

Gray, who is credited with taking many of the photos included in the book, and uncovering many of the gems from curling’s other photographers across the years, said the most rewarding part of creating the piece was “finding so many unseen photographs and fabulous photographs which hadn’t been seen for many, many years.”

The process didn’t happen overnight. “Organising them took a year to fashion,” he said, “so that they could be seen by others and enjoyed.”

The book is being distributed by the World Curling Federation to its Member Associations and stakeholders. A a catalogue record of the book is held in the British Library, in London.

Mike Haggerty is the WCF journalist at its major international events, similarly Richard Gray is photography manager – he compiles and looks after the WCF’s extensive image library. Each year Douglas Colquhoun designs the WCF’s Annual Review.

This article was written by Jolene Latimer, winner of the WCF’s Sport Media Trainee Programme. The winning trainee photographer Jeffrey Au took the pictures at the launch.