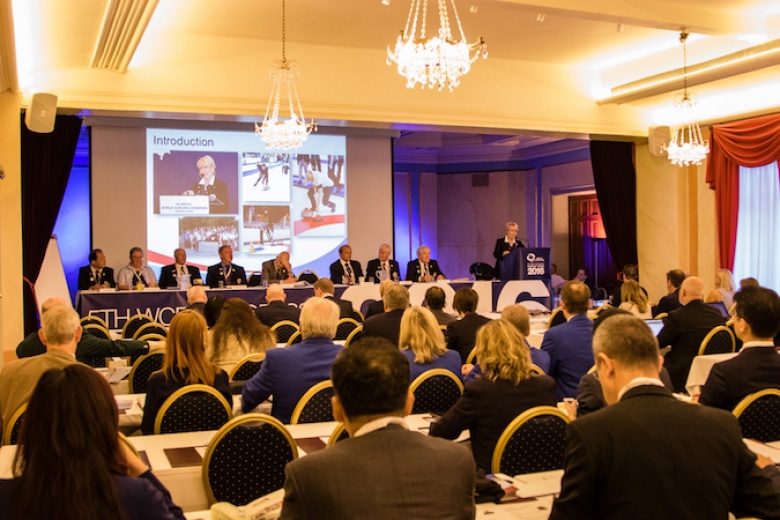 The 54 Member Associations of the World Curling Federation (WCF) have approved the WCF’s proposed resolutions for sweeping and brushes in elite curling, at its Annual General Assembly (AGA) in Stockholm, Sweden, today (Saturday 10 September).

This approval gives the WCF the authority to set rules, specifications and policies for sweeping techniques and brush technology – the first of their kind in the sport. At the AGA five new or adapted sweeping and equipment rules were accepted – a summary of these rules can be found below.

It was also announced that brushes will now be made from a single fabric, which is from a single source – these will have one standard composition, weave, coating and colour; the approved brushes must be made widely available for purchase and the new standardised brushes will first be used at World Mixed Curling Championship 2016 in Kazan, Russia next month (14-22 October).

Furthermore, the WCF’s position on brushes in the recreational market and the National Research Council of Canada’s Executive Summary following the Sweeping Summit 2016 held in Kemptville, near Ottawa, Canada were published – these documents can be downloaded at the bottom of the page.

A series of other announcements and decisions were made during the AGA including venues for future championships, additional rule changes and board elections.

It was announced that the Andorra Curling Association will host its second-ever international curling championship in (6-13) May 2017, when they hold the European Curling Championships C-Division 2017. Also, it was confirmed the World Mixed Curling Championship 2017 will be held at the Palladium de Champéry in Champéry, Switzerland, in (6-14) October 2017.

The MAs voted for WCF Vice President for the Pacific-Asia Zone, Hugh Millikin to retain his position on the Executive Board, while Sweden’s two-times Olympic champion Cathrine Lindahl was appointed as Director. Later in the day the Executive Board met and accepted Guyana and Mexico as Conditional Members of the WCF – which takes the total number of Member Associations to 56.

WCF President, Kate Caithness, said: “I’m delighted that Hugh has been reappointed and Cathrine appointed to the board in their respective positions. I look forward to working with them in the coming years.”

“I’m also pleased that we have reached, what I believe are, clear and lasting solutions to the challenges we have faced with brushes and sweeping over the past 12 months.

“Thank you to the Swedish Curling Association for their kind hospitality this week and for hosting another successful Congress and Annual General Assembly.”

The sixth Annual World Curling Congress will take place in Bled, Slovenia from 14-17 September 2017. The 2017 WCF Annual General Assembly will be held on Saturday 17 September.

Summary of new sweeping and equipment rules approved at AGA 2016: