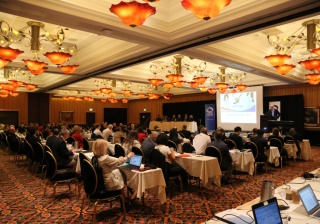 Members of the World Curling Federation have elected a new board and voted to introduce a new World Junior qualification event, a World Mixed Curling Championship, along with approving a raft of other key rule changes.

The competition and rule changes and board elections took place at the World Curling Federation’s Annual General Assembly (AGA) held during the 3rd Annual World Curling Congress at the Peppermill Resort in Reno, Nevada, USA.

Delegates and representatives from the Federation’s Member Associations, key stakeholders and partners have been gathered in Reno to discuss strategy and development for the Olympic and Paralympic Winter sport of curling since the 4th of September.

In the WCF board elections, current President, Kate Caithness OBE, from Scotland, was the only candidate nominated for the next four year term as President and was elected by acclamation.

Upon her re-election Caithness said: “It has been a real honour to work and serve for the Federation. I work in a man’s world and you, our Member Associations, have put your trust in me to raise the profile of curling. For the next four years I promise to give you 100% in my work to represent you and our great sport.”

In addition, a new Board structure takes effect as part of a new WCF constitution from this congress onwards. The new Board is comprised of eight Board Directors: a President, three Vice-Presidents each from the three zonal regions of the WCF and another four Board Directors.

WCF also revealed plans to Member Associations for a Portable Curling Facility. This new programme offered by the Federation is to help establish dedicated curling facilities in regions which have, up until now, found it difficult to garner the resources to build a permanent curling facility.

Competition & Rules changes approved by the AGA:
– Replace the European Mixed Curling Championship with a World Mixed Curling Championship. Effective from the 2015/16 season.
– Introduce Thinking Time instead of Running Time for controlling the length of a curling game. This change will be effective from the 2014 European Championships.
– Replacement of the current Zonal Junior qualification system with a World group system. Effective from the 2015/16 season.
– To adjust the rule for the Last Stone Draw (LSD) and Draw Shot Challenge (DSC) to incorporate two individual LSD’s per game. Effective immediately.
– To introduce a new system for measuring the LSD. Tested 2014/15 season.
– To only have one round of tie-breaks in WCF Events. Effective immediately.
– Prevent the Use of Electronic Devices on the Field of Play. Effective immediately.
– Approve the WCF Wheelchair Classification Rules

Competition & Rules changes which did not reach the required two-thirds majority:
– To use the traditional 1v4 / 2v3 semi-final system rather than the Page Play Off system.
– To prevent a change in the position of the chair in Wheelchair Curling

Competition & Rules changes withdrawn for further discussion:
– Replacement of current U21 age group with U18 and U23 age groups
– To fix the light colours for team uniforms

The 4th Annual World Curling Congress will take place at the Crowne Plaza, Belgrade, Serbia, from 2-5 September 2015. The 2015 WCF Annual General Assembly will be held on 5 September.